From clay tokens in Mesopotamia to silver coins in ancient Greece, for centuries money has been something tangible. As societies moved away from barter, they began using items that were durable, portable and widely accepted as a form of money. More recently, coins and banknotes have helped to build modern economies.

In recent years technology has begun to change the way we think about money. No longer is money just something physical. Instead, in developed economies, the majority of people’s money is kept in bank accounts rather than under the mattress. There has also been a growth in electronic payment services such as PayPal, Apple Pay and Venmo, meaning money can be transferred quickly over the internet.

Spending and hoarding during COVID
The move away from cash as a medium of exchange has only accelerated during the pandemic. Fears that banknotes will spread the virus have seen many shops asking customers to use contactless payments.

While the World Health Organisation (WHO) has tried to allay these fears, saying cash is no more likely to spread the disease than other objects, the Bank for International Settlements (BIS) has noted a marked increase in the use of contactless cards.

Since January 30th, the day when COVID-19 was labelled a ‘public health emergency’, the use of contactless has made up an even greater proportion of payments (contactless accounts for over 70% of card transactions in some countries according to the BIS). Maximum limits on contactless payments have also been increased in many countries during the pandemic.

In addition, people have moved a greater proportion of their spending online. This further increases the use of electronic money. And as lockdowns were implemented, places where cash was often used such as hairdressers, bars and cafes were shuttered.

Rather than spending cash, households are hoarding it. This is in line with previous crises when households have sought the security cash provides (what John Maynard Keynes called ‘precautionary demand’ for cash).

While, in the US, use of cash has declined, households have increased their holdings of it: the total amount of currency in the US has risen by 10% since the end of January (see chart). 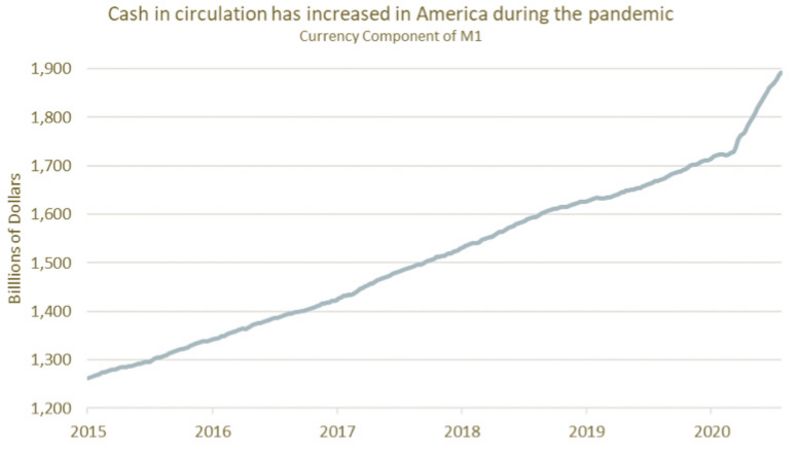 Phasing out cash?
Some economists were arguing that cash should be phased out even before the pandemic. Advocates of a cashless economy point to the inefficiencies of cash: the cost of storing it, counting it and transporting it. These costs can be difficult to quantify. The British Retail Consortium, a UK trade body, has estimated that the cost of handling cash amounts to 0.15% of the transaction (versus 0.49% for credit card fees). Others put the figure much higher. IHL, a consultancy, says the cost can be up to 15% for businesses that are frequently having to count and transport cash.

In his book, The Curse of Cash, Kenneth Rogoff argues that the existence of cash also aids tax evasion. In the informal economy, workers are paid ‘cash in hand’ making it hard for authorities to levy income taxes. He also points out that cash is a boon for organized crime: high denomination notes allow money to be laundered without an electronic trace.

Removing cash would also increase the effectiveness of monetary policy. People would be forced to hold their money electronically meaning changes in interest rates could be passed on. Given the option of holding cash (which pays an effective interest rate of zero), taking interest rates negative can be tricky for central banks. This problem has become more acute as COVID-19 has required central banks to loosen policy.

A number of central banks are considering introducing their own digital currencies. China and Sweden are both testing versions of a central bank digital currency (CBDC). This would allow households and businesses to hold electronic central bank money in the same way commercial banks do now.

A CBDC would also mean interest rates set by central banks could be passed on to households. This would improve monetary policy transmission. A CBDC could also provide an alternative to the electronic payment systems offered by commercial banks as cash becomes less common. Holders of the CBDC would therefore not need to worry about banks failing, which would improve financial resilience. A CBDC could also be offered free to households and firms meaning they would avoid the transaction fees currently charged by credit card firms.

A need for cash
Some, however, worry about the end of cash. Even in developed economies many adults still rely on it. In 2017, 14 million adults in America lacked access to a bank account (the “unbanked”), with cash the most common way they paid their bills and received their wages. There are also concerns about privacy if cash were to disappear. A CBDC would need to address these worries and ensure everyone had access.

However, while a substantial number of people still rely on cash, governments have pledged to protect it. The UK has announced it will look to protect access to cash for those who need it. Even in Sweden, known for being a country relatively far along the transition to a cashless future, a law was passed last year forcing banks to provide cash in rural areas. Protections such as these mean that even though the future looks increasingly cashless, cash may be around for some time to come.