What Would a Vaccine Mean for the Economy?

Many scientists believe the discovery of an effective vaccine is the most likely way out of the pandemic. A vaccine would prevent people from becoming seriously ill with COVID-19. The need for social distancing and lockdowns would diminish. And governments would no longer have to tread the line between protecting health and saving the economy.

According to the World Health Organisation, there are now over 170 vaccines in development. 11 are in large-scale clinical trials, where efficacy is tested. If successful, a vaccine would then need regulatory approval before it could begin to be rolled out. Although much uncertainty remains, scientists say a vaccine may be available early next year.

This would wake up economies. A vaccine would mean the loosening of current demand and supply constrictions that are holding economies back. Indeed, the IMF estimates that speedy medical advances - including a COVID-19 vaccine - would boost global income by 2 percent in 2025, compared to a baseline which assumes prolonged social distancing (see chart). 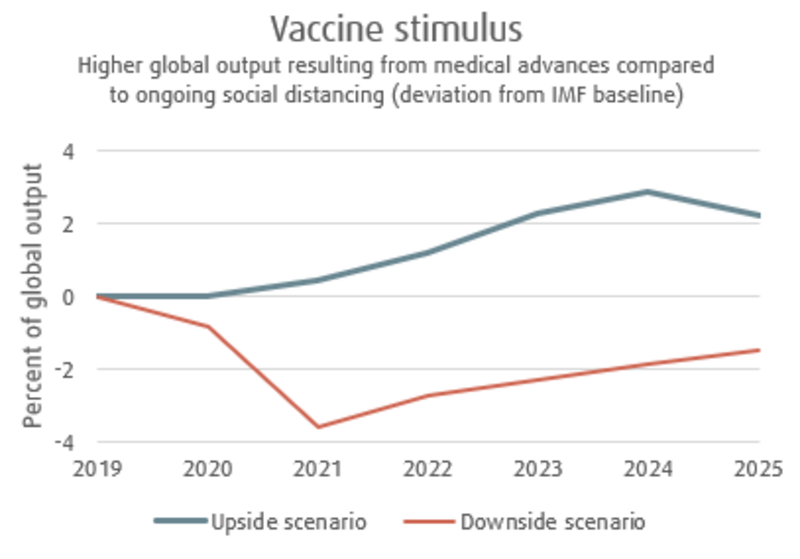 Despite all this, the arrival of a vaccine is unlikely to mean economies snap back to where they were pre pandemic.

For one thing, vaccine distribution will take some time. The head of UK’s vaccine task force has said that only half of the UK population will be inoculated initially. Vaccines will first be given to vulnerable groups, healthcare staff and frontline workers. This means we might end up in a twilight zone where precautions are still needed for much of the population.

For example, it might be that restaurants have to continue to operate at reduced capacity. Travel will remain subdued. And large gatherings, such as concerts and sports matches, might remain prohibited for some time beyond the arrival of a vaccine.

Added to this, if a vaccine proves only partially effective, requires multiple doses, or needs to be reformulated and redistributed every year (like the flu vaccine) this will mean additional costs borne by overstretched healthcare systems. Economies will continue to have to operate below capacity.

Even with a vaccine, some changes to the economy are likely to become permanent. People have become accustomed to conducting meetings via Zoom, working from home and buying online. The crisis has caused a shift in preferences that the end of the pandemic is unlikely to reverse.

This means economies will have to undergo a number of changes to reallocate resources. The IMF, for example, says employment will have to move permanently from sectors that are shrinking (such as travel) to ones that are growing (such as e-commerce).

This is likely to be a huge undertaking. According to the International Labour Organization, the equivalent of 400 million full-time jobs were lost across the world during the first six months of 2020. While some of these are in sectors that were shuttered during the height of the pandemic and have now reopened, many will be in sectors that face being permanently smaller in the future.

This is especially true in developed economies where services make up a large portion of the economy. During the pandemic, people have reduced their spending on certain services to try and avoid the virus. In turn, people have found new ways of living that they will take forward. Shops, hotels, and airlines will all likely employ fewer people in the future, a process hastened by the pandemic.

There appears to be emerging evidence of permanent employment shifts in the US. Despite recent falls in the unemployment rate, owing to workers being recalled from furlough, ‘permanent’ unemployment (people who do not expect to return to their job) has increased. While it will take time for policymakers to understand which shifts are permanent, many workers will no doubt have to be supported to find work in new sectors.

This is where government policy combined with the discovery of a vaccine can help. Once a vaccine exists and the crisis has abated, it becomes clearer which shifts are permanent. Governments can then confidently provide funds to help workers retrain and move into growing sectors. Airline assistants may end up as healthcare workers, gym trainers as green energy installers.

More broadly, if there is an effective vaccine for the virus, policymakers will have greater leeway to enact stimulus policies to revive the economy. They won’t need to worry about higher economic activity causing a spike in the virus. They will also have a greater idea about the economic hit from the pandemic and the necessary scale of support.

While the arrival of a vaccine may not herald the end of the virus, it might be that a vaccine acts as the single largest shot to the world economy. Confidence and some semblance of certainty will return. Economies will settle down and changes will become permanent. Then policymakers can start to help economies around the world heal.