John Maynard Keynes warned about the dangers of excess saving. In his book, The General Theory of Employment, Money and Interest, he set out how, when an economy increases the amount it saves, aggregate demand falls. This, in turn, lowers an economy’s total income, meaning less in total can be saved. This process later came to be known as the ‘paradox of thrift’.

Hoarding during the pandemic

The pandemic, and ensuing lockdowns have meant saving rates (defined as the proportion of disposable personal income saved rather than spent on consumption) have spiked (see chart). People have involuntarily saved a greater proportion of their income as shops, restaurants and cinemas have been shut. Fewer people have taken holidays. And for those working from home, commuting costs have disappeared. 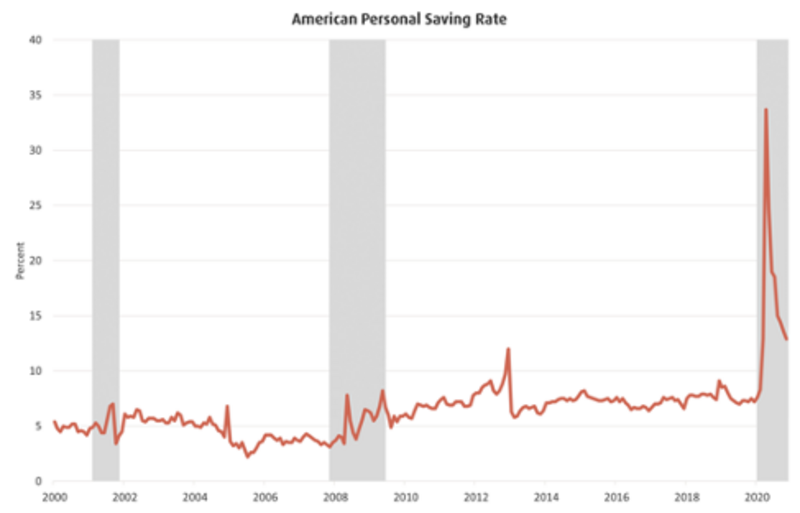 This means that those who have kept their jobs have probably seen their bank accounts swell. This is particularly true for higher earning households who typically have higher discretionary spending. This spending was curtailed by the pandemic, meaning they have had little choice but to save money.

A recent Bank of England survey found that 28% of UK households had accumulated additional savings as a result of the pandemic (compared to 20% that had depleted their savings). 42% of high-income households (defined as being as in the top income quintile) who remained in employment had increased their saving. On the flip side, those that were poorer, had lost jobs or been furloughed were more likely to have drawn down bank balances.

Now that vaccines are beginning to be rolled out, some are suggesting that healthy household balance sheets could boost the economic recovery. As restrictions are lifted and confidence returns, households might decide to spend some of the money they have accumulated, boosting demand.

People might try and make up for lost time. This could fuel demand for restaurants, festivals and airline tickets if people feel as if they have been cooped up at home for too long. We could see a repeat of the ‘Roaring Twenties’ – a period when consumer spending boomed after the privations of war. This was the optimistic point made recently by Andy Haldane, the Bank of England’s Chief Economist, who said ‘pent-up demand’ could fuel a quick economic rebound.

There are some who question this. While saving during lockdowns was enforced, greater levels of saving might persist into the future. If people remain cautious about the virus or the economic recovery stutters, or if the pandemic has made people think sudden economic shocks are more likely in the future, precautionary saving might settle at a rate higher than previously.

Given saving has been concentrated among higher income households who have less tendency to spend additional income, accumulated savings may also simply remain deposited in bank accounts. And if, as short time working and other support schemes come to an end, unemployment spikes, consumer spending could be held back.

On the other hand, people might remember that governments were quick to put in place measures to protect incomes during the pandemic. There will be strong pressure to deploy furlough programmes in the event of future recessions. This might reassure consumers worried about future economic slumps that their incomes will be protected, reducing the need for precautionary saving.

Whether or not people remain thrifty after the end of the pandemic will have significant economic consequences. There could easily be a situation where consumer spending increases as people put some of their accumulated savings to use. Supply, scarred by the pandemic, might not be able to keep up. This could quickly lead to higher inflation.

This would pose a dilemma for central banks. After a decade of feeble price growth, central banks would initially welcome a spurt of inflation. Indeed, the Fed recently adjusted its strategy saying it would tolerate periods of higher inflation to make up for past shortfalls.

However, if higher inflation endured then central banks would have to decide whether to tighten monetary policy. Higher interest rates would increase interest payments for governments on the debt they have run up. Central banks might come under political pressure to instead keep rates low.

On the other hand, if money remains in bank accounts, this will constrain economic growth and hold back inflation. This will be the ‘paradox of thrift’ that Keynes warned about. Given the profile of households that have amassed savings during the pandemic, this seems more likely.